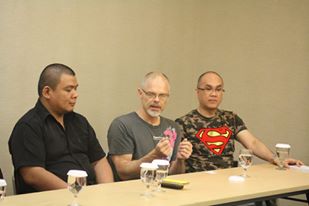 Well, there a difference between people. It depends on what kind of person are you. I guess there a line, if you too far below the line of motivation, it is hard to come up. But I believe you can raise it a little bit. Searching for some Inspiration is a good example. You can look at other people’s art, but don’t get it let you down. Some people become negative when they see other’s art. Like, ohh I can’t never be like them. Try to think differently, like, oh that’s humanly possible, and I am human, so I can also do that one day. You got to have the positive thinking.

Ya, and the thing is, you can learn something new, from other people’s art. Maybe not right away. But you keep it in your bottom of your brain. And maybe later you’ll find something that is particularly interesting to you.

And find something that you like. Well, I know I’m not really interesting in horror. I don’t know if you notice. I paint mostly ladies, beautiful things, pretty flowers, fairies. And things. I’m not interesting in monsters biting each other, and stuffs. I leave it to others.

Music can be inspiring too I guess. Ya the point is, you have to find what you love.

You could take a classes where you draw life drawing. Is that available in here? It cost money, but it is a good investment. Because that is a hard thing to do.  You inspire yourself by looking art during the week, and then you get all fire up for your session with the life drawing. And then you draw draw draw. Maybe it stinks at first, but you have to keep doing that. You know, it happens fairly quickly, within 6 months you already seen improvement. Especially young people. 6 months, I’m sure. If you can keep it up in a year, it is a big improvement. If you do that for just 2 or 3 weeks, it’s not gonna do anything for you. You have to keep doing it, as a habit. If it is a habit, it’s easier for to do it again and again and again. Don’t make it too hard for yourself. If you say, I’m gonna do it for 2 hours a day, then you gonna fail. That’s not realistic. But if you say, I’m gonna sketch for 5 minutes a day, it will work, and eventually the duration will be increase. 5 minutes, 10 minutes, and so on.

When I was a kid I really like to draw so I do it all the time and didn’t go out that much so I was a nerdy kid. My parents move to Sweden when I was three. But then we move back to Australia when I was 19. I was in art school at Australia. Before, we paint traditionally using oil paint and canvas, and all sort of stuff like sculpting and printing but I didn’t quite like it because it took very long to get an image that I want to be done. But that time, I want to go back to Sweden because I have been living there my whole life. So after a year in Australia I went back to Sweden to study art. It’s almost the same but a bit more advanced, we did typography, design, illustrations, they don’t have it in Australia so this one was more professional. It prepared me for drawing and painting but not for 3d. But I know, I just want to get into 3d, so I got into that myself. I was life in Hong Kong, and I bought a computer, and try to understand the software and make stuff.

I don’t know what to talk about my motivation, because back then, I was working until 2 o’clock every night. And still the same as when I was a kid. A nerdy guy. I didn’t really socialize, so got no distraction. I didn’t go out drinking and dancing, unless I want to find a girlfriend and married. Haha. I was just doing art all the time.

I was working in America for 8 years. But not in Disney or Pixar od Blizzard, well it would be cool. Yeah, everyone wants to work at Blizzard. I worked at slightly smaller places, well it is big enough, I had some bad luck with the financial issue in 2008, during the economic crisis. It was worst in America then anywhere else. I lost the first job that I had. So I have to move and find another job, but same thing happened. And then the third time, the company that I worked with, didn’t do too good, I worked there for a couple years. And they started laying off people. Because that’s the first thing you need to do when you need money, right? Because people cost more than anything else in the company. And I one of the most expensive one back then, so I go first. Haha.

Yeah, it happened 4 times, and the last company in Florida. I think I found the right one. But sadly, Microsoft shut them down. So. then I go back to Malaysia. I was happy there. I love the food, the people, and the cheap prices. And the sense of calm and quite. You don’t have to look over your shoulders all the time for the tax man and other stuffs in America. Well I was making a lot of money, but I had depths because of being laid off. But I had some good experiences there.

I have two things I’m working on right now, one is the pin ups and you can check that out on the patreon.com thing that I do, and the other one is a graphic novel which is basically about an android running being chased, she’s being set up to a crime and she’s trying to escape. Anyway, mostly a lot of running involved. She’s in Hong Kong because I just like Hong Kong. I also lived there for 10 years, I also have some memories of that place. Those two other things that I do. So, how do I approach it from the start to finished… this one is also interesting. The graphic novel, I typed out the text first and then I put bits like the moment I want to do, so I put text here and there on the paper, and then I look at it and if it doesn’t seem to flow right I move things around, maybe to the next page. I repeat the process until it’s perfect and then I make the frames. There’s two ways to do this. One is you do this like me, write the text first and the other one is you start to sketch the art first. To make the pin ups I start with looking at picture of naked women, like I said, if you want to make superheroes you look at superheroes pictures, basically look at the stuff you like and go from there.

Well, personally I like to start with something like a block out in Max. For hard surface such as camera I would not do that in Zbrush at all, I would just do that in Max. but for something more organic like this plastic bag of t-shirt, if I want to sculpt it exactly like this I would be quite a fun challenge to do that, I would do a pillow shape in max first with the little sharp corners. Because the sharp corners are hard to get in Zbrush. And in Zbrush, I’ll make it high polly and then divide here and there, and start sculpting. I’ll start with the big shapes. And if it was a game asset, then I would bring that out, and retopologize it, if it was going to be animated. If not, I would just decimate it. And done. Haha

They do that because they not sure if the artist are going to be able to manage to get the perfect realism that they want, and since it’s a movie and not game, they have a budget that they could spend on millions of polygons and hours of pre-rendering time. So, there’s no problem with doing that and if you have the budget to do that, that’s fine. But it could also be done by a very clever artist to do it and it may have to be just one because it’s hard for a team to work together to make a whole dragon. One guy alone could do it but would take it longer since he’s alone. I think it would be easier for a lone rendered type of guy, a genius type of artist also if you have two geniuses that will be better, but geniuses often don’t work well together. Anyway, if you do it on a team how are we going to split the dragon? It will become a big hassle. Well, you can have a team who aren’t that great of an artist but if they simulate it bound to look very good. As long as they know the technic of what they doing.

Well, that’s how the director thinks, they willing to spend time and money to have a team of people to get that done.

oh, yes I was. But now games are coming closer and closer to movie. Movies has always been my top priority, I never work with movies but I always love movies more than games. I have played games but I don’t play games as much anymore. But I still watch a lot of movies if I have a chance. I love movies, I wouldn’t mind working for a movie. Working on a movie in America have been more difficult because Hollywood also in crisis, maybe they seem out of the crisis now but if you look further back in time in film industry in America it was greater. America entertainment industry, even the America itself had better economy, everything was better. So, I think they heading south (laugh), sorry. That was just my opinion, that was my long diagnosis, we’ll see if that true. Especially if Trump get elected. Haha.

For the game industry, we actually have hired somebody, but later we have to fired them, because they didn’t know what we thought they knew, when they showed the portfolio. So be careful with that. And, before I said, my boss is picky right? Haha he really concerned about the topology thing. You should really know and understand that. And that’s like the very minimum standard. He can’t tolerate if someone keep making the same mistakes over and over again. And we really try to give people the chance. We had like 6 months of, you know, try to raise the person’s skill. But yeah, sometimes it’s just doesn’t work, so we need to fired them.

And then, later on, how to be economical with polys. Like if you have a cylinder, you don’t have to have many divisions on the height side. Yeah, you know.

And also for the 2d artist, layer management in photoshop is so important. And other thing is the fuzzy outline. You have to have the clear outline.

And for me, feet and hands are very difficult to draw. And sometimes artist are lazy to draw feet and shoes. They skip them. However it is really important. I just worry about the feet a lot. I see everything is nice, but the feet is not. Haha.

Yeah, you can ask me question via email : stahlger@yahoo.com.